Historical Cycles of the Greek Economy (from 1821 to the Present)

George Alogoskoufis English translation and adaptation of a short article published in the Greek newspaper ΤΑ ΝΕΑ, January 23, 2021 The article is a summary of research reported in, Historical Cycles of the Economy of Modern Greece: From 1821 to the Present, Working Paper no. 1-2021, Department of Economics, Athens University of Economics and Business. The economy […]

… Greece’s existence as an independent state gained formal recognition in the treaty of 1832 between Bavaria and the great powers, but the Greeks themselves were not involved in the making of the treaty. Greece formally became a sovereign state, and the Greeks became the first of the subject peoples of the Ottoman Empire to […]

Greece and the Euro: A Mundellian Tragedy

by George Alogoskoufis GreeSE Paper no. 136, Hellenic Observatory, London School of Economics This paper analyzes the process of destabilization, crisis and adjustment in the Greek economy since the accession of the country to the European Union and, subsequently, the euro area. It reviews four policy cycles of the past 40 years, the four acts […]

by Kostas Kostis Professor in the Department of Economics at the University of Athens History’s Spoiled Children is the story of a small Ottoman province and its transformation into a modern European state. In some respects, the challenges to the formation of the Greek state could be likened to those encountered by the Western world in […]

Modern Greece: What Everyone Needs to Know

by Stathis Kalyvas Gladstone Professor of Government, University of Oxford When Greece’s economic troubles began to threaten the stability of the European Union in 2010, the nation found itself in the center of a whirlwind of international finger-pointing. In the years prior, Greece appeared to be politically secure and economically healthy. Upon its emergence in […] 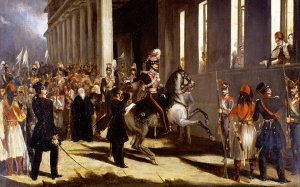 The website Economic History of Greece is dedicated to the study of the course, the transformations, the development and the crises of the Greek economy from the 19th to the 21st century.

It contains short research based articles on the determinants of the historical evolution of the economy of modern Greece, with special emphasis on the role of social, economic and political developments and institutions, as well as the effects of the international environment, geopolitics and domestic economic policy.